A work of architecture is a shift around the world and the urban cause. In addition to the intelligent knowledge of the functions, it is a standard axis of mental and physical crossroads – a space where mankind meets. It is repulsive of mental disorder and, at the same time, an icon of the present – it is concept and matter, provocation, urban mutation and transformation. It goes beyond concepts and dematerialises limits, breaks with censorship and petty limits. It is also an area of well-being.

To build in relation to the present, for a future unattainable utopian reality.I recall that in 1968, I published, at a difficult time for national life, the “Disturbing Art” manifest, which noted that “immortal art will always be disruptive” – disturbing, especially, to small spirits and in all disciplines. Architecture in its balance – eternity, is unbalancing, intensifies the real, disturbs, integrates by disintegrating – interacts and is of programmatic and prophetic relevance, like a chiaroscuro.

I am talking about disturbing architecture!

All that I have said, I see and identify in this excellent work of architecture which happens to be called the “José de Guimarães International Arts Centre”, designed by the “Pitágoras” architects office.

I met the architect Raúl Roque, one of the “Pitágoras” collaborators, at the time when the Guimarães Municipal Council entrusted him with preparing the preliminary architecture project. Now that it has been built, I have been asked to say a few words about the building, to which I contributed in a merely literary, conceptual and metaphorical form.

But let’s see. This building was made to house a set of works of art covering a historical “range-atlas” going from Neolithic to contemporary times, about 7000 years. From China to Mesoamerica and to Africa.

So we began a series of meetings and conversations where I explained my idea of time, of the world, and of art, of concept and matter. I explained that my project has an immutable spiritual, but is not unmovable – adaptable to changing thoughts. We spoke of everything that seemed best suited to display the art of all ages in agreement and in confrontation – art from past history and art that will make future history. We talk about the intimacy of the artistic object – its concept, delicacy and veneration. The way you see – the look.

We spoke of objects and artefacts used in festivities and rituals – the sacralisation that remains after use, and its visualisation in other latitudes and contexts.

We spoke of the silence of the everyday world, of non-dialogue, hypocrisy, envy, of the mystery of magic and of wrong turns. Of wars and of hatred, of inequalities.

Of the need for provocative architecture!

We spoke of several museums that we both knew, of Quai Branly and the Temple concept that Jean Nouvel defended. Of the Beyeler Piano Foundation, extraordinary for its harmony and scale, where all of the arts are mixed together, the new Pompidou Centre by Metz or the fabulous Chichu Art Museum by Tadao Ando, in Naoshima, where I have several sculptures, or of the extension to the Moma in NY by Taniguchi.

Anyway, we talked of the museum world which Clezio recently presented in an exhibition at the Louvre, and the current functions of the new centres and cultural institutions, non-differentiated, scattered everywhere. We spoke of the failure of the majority. We discussed the need for a new and different design, both in context and in content. And we continued to talk about everything – even things that, at first sight, are insignificant.

And so things were happening and the work was germinating, first in the project and then in reality. We spoke of the challenge of an intervention in the urban space and the democratization of the public space and of the access to the work of art, integrated into the urban space.

We spoke of urbanism and the transformation of the cities. We spoke of anthropology, and the capacity to discern the goal and the “inter-subjectivity” Husserl speaks of. We spoke of the images spoken of by Didier Huberman, “the lying image” and the image he wants to appear to survive.

We spoke of the noise of the cities and what our children will be like, they belong to the world of tomorrow, making history, and of our ancestors who belong to the world that is no longer visible, looked at like shadows, from the perspective of history. Only their artefacts will be the ideas, testimonies to the past.

We spoke of the importance of archaeology for understanding the present in the light of the past and of how an atlas of the culture shown in an enclosed space is neither permanent nor temporary.

And we talked of museology, and of light and of flat and three-dimensional objects, in wood and ceramics and fabrics. And of paintings on canvas and on paper and of their fragility and of taking care when handling and transporting pieces, and of keeping them in “storage”, and of air conditioning, of temperature and of the moisture and light filters. Of the influence of the human factor in the deterioration of objects.

We spoke of urban interventions and the close collaboration between artists and design architects and urban planners. I spoke of my urban intervention – the most extensive – in Kushiro, Japan, where my collaboration with city planners began in the preliminary stages and even in the design stage and how we would overcome all the difficulties inherent toa harsh climate, where fog was “chronic”. It was an unprecedented urban intervention, where more than 80 works of art were used to relieve an inhospitable port area of Japan that kept the youth away, decreasing the population of that city.

Pierre Restany, great knower of things and of thought, immensely great heart, who invented the “New Figuration”, says in the book he dedicated to me (1): “you can ask to infinity about why a contemporary artist would adopt the name of his home town. The most obvious reason seems to be the desire to assert a connection to a specific territory – but to do this, the geographic location must serve him. His memory of the mediaeval walls that surrounded the city before the expansion of the seventies and the building of the University. The Martins Sarmento archaeological society, that almost adopted him, curious as he was about history, the ruins that abounded and the granite rocks, “boulders” of Penha mountain, the linen and handicrafts, the cutlery, the hides and their acrid smell, theremains of Roman pottery in the old castles in the area ... “

These were the factors that would subliminally be the creative humus of a plural universe, which would unite and give meaning to anthropological archetypes. So insistently “Guimarães” and its “Civitas” are unarguably the chosen “Territory”. And, twenty years ago the idea came up of establishing an anthropological area or multidisciplinary field where we could gather and study “art” from heterogeneous sources.

The CIAJG, is nothing more than the accumulation of a set of ideas developed previously with the Pitágoras architects office.

A temple was the sense given to this magnificent architectural project, which would house magical objects that were loved and feared. Objects that are mostly linked to the daily life of the people, serving them in their rituals.

A building would be raised that would be marked by its interiorness, i.e. without the normal distractions of windows or perspectives that take away contemplative power, accumulating architecture within architecture. We would have to be careful, as Ramon Sarró says, with the purification of the artistic object, separating it from its context and original use. The concept of converting these types of objects into works of art is to undermine their destiny.

A building, itself a programmer, on an articulation that allows discursive reading while at the same time safeguarding the autonomy of the specificity of the materials and the techniques, subject to museum requirements, with regard to its differentiated classification: woods, textiles, paintings, papers, terracotta, bronzes, jades, gouaches, watercolours, graphic work, organic materials, etc.etc.

The object itself should be safeguarded from the artists, its producers. This job belongs to anthropologists.

On the other hand, the same space of discussion should have the anthropological and artistic together without them being anthropophagously consumed. And, spaces should also be created where non-Western civilizations would dwell alongside the so-called “writing” civilizations.

So this building, as well as its artistic objects, is a receptacle of metaphors, of syncretic harmony and reciprocal dialogue where history and contemporaneity meet, thus gaining historical consciousness of art. 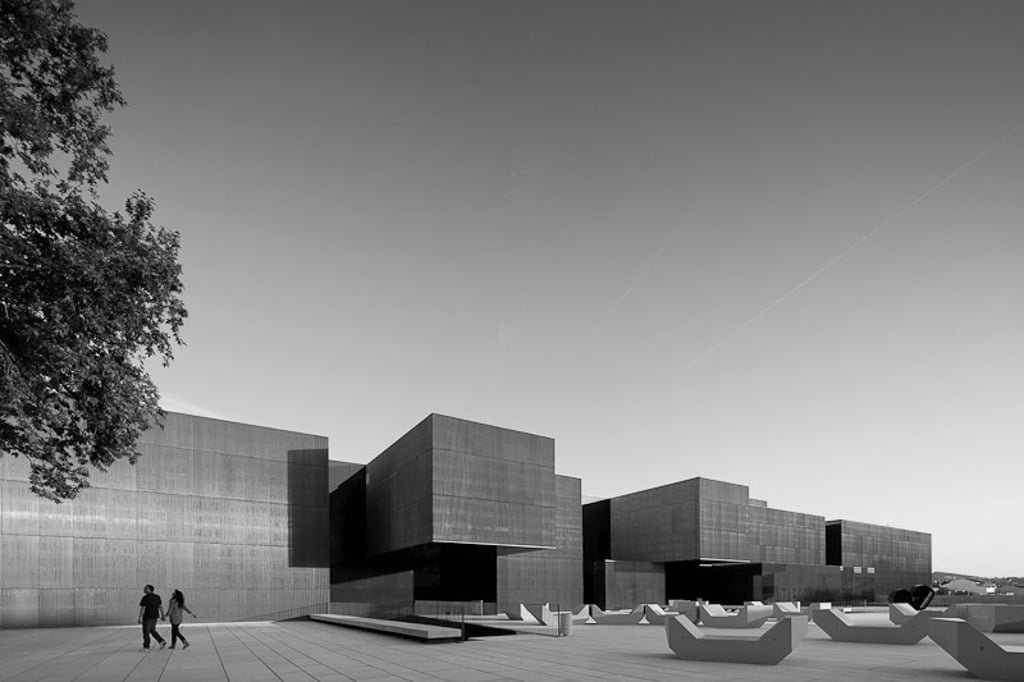